Round 1 of the KSR 1991 F1 Championship takes us to South America and Autódromo José Carlos Pace aka Interlagos.

Interlagos is located in São Paulo, and has hosted the Brazilian GP since 1973 (which may change in the very near future).

The track was always meant to be housing, however after the fun times of 1929 a racing circuit was deemed more suitable. The track opened in 1940.

It has been addressed in other threads, but to confirm this is a later start time that we usually do, however the amount of racing we're doing is reduced because we're only running a single race.

Compulsory Pit Stop
There is no CPS in this league, however you must run both compounds of tyre (both Hard and Soft), and you cannot make your stop on the last lap. besides that your strategy is completely up to you. (also note that the cars do not have pit limiter and the limit is 80kph here)


Additional Information
The fuel tanks actually have a capacity of well over the default of 110L, so fuel should not be an issue for anyone, however bear in mind, the less fuel you run, the faster you can be without being as hard on the tyres.

The engines do not last long after getting hot - make sure to run enough cooling and have boost adjustment buttons mapped.

Practice pit stops - the speeding penalties are extremely sensitive here. If you go at 81kph for more than a second or so you will be penalized.

Official Practice
We'll do an Official practice night on Tuesday the 14th (approx 8:00pm) for people to show up and get a feel of the car around other racers. If we get enough people we'll do a couple of short races
Top

The quick impromptu races the other night were great fun so I’ll definitely be there!
Top

Found I was losing down force in a few places as I was bottoming out - seemed to improve things a lot. So people may need to look at their right height\spring hardness 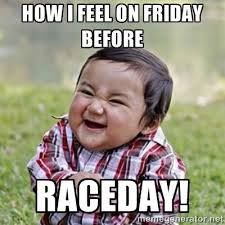 I'll be on at some point tonight to help with setups and that kinda stuff.
Top

Also, for those having some practice tonight.

Please don't come on and spoil Game of Thrones....that would be much appreciated.
Top

Please don't come on and spoil Game of Thrones....that would be much appreciated.

Would appreciate that a lot as I'm saving all the episodes for a binge watch weekend.
Top

It is very sad that on the day of our first Formula One round, Niki Lauda has passed away.

Does anybody else have a problem with restarting these? Sometimes it works, sometimes it doesn't. Is there a secret that I'm unaware of?

Of course the real fix is to drive well, and not require a restart, but some of us are a little useless...
Top

kerryland wrote:Does anybody else have a problem with restarting these? Sometimes it works, sometimes it doesn't. Is there a secret that I'm unaware of?

Of course the real fix is to drive well, and not require a restart, but some of us are a little useless...

To avoid stalling, you may need to run Auto-Clutch (F11).

I normally run this off, but i'd rather not DNF due to a spin/stall
Top

Would like to congratulate everyone on the first few laps, didn't hear of any incidents or crashes which is great to see.

Some lessons learned about not sliding the tyres at all to preserve the tyre grip and life.

Congrats to Riven on the win and Josh for pushing him hard all the way.

Look for a couple of tweaks to the race format for Imola (which will be a more difficult challenge).
Top

Thanks for organising this series Obsc3ne- that was some epic racing last night!
Riven, congrats on the win and Josh was schooling us all on race craft- coming from 9th place to battle for the lead!

My apologies to MMJ for our little clash in T3, I thought I had left sufficient space for you at the inside but looks like we got tangled up anyway.
Top
Post Reply
14 posts • Page 1 of 1